Denise has enjoyed dancing and performing throughout the majority of her life and has been a staple in the performing arts community.  She is a licensed ZUMBA® fitness instructor and loves to share her energy in class.  This studio is a dream come true for Denise and her family.  They hope their passion and love for dance is passed on to all of their students.

Brittney has been dancing and performing ever since she was a little tot and trained at the Elk Grove Park District, Faubourg's School of Ballet, and with Elk Grove High School's Orchesis.  Brittney is trained in tap, ballet, pointe, hip hop, lyrical, jazz, and modern dance.  She currently works as a nurse and dances whenever she has the chance to get in to take a class!  Her favorite types of dance are Tap and Hip Hop and she is thrilled to be teaching both this year.
(Brittney has been with Cimino Dance since 2009) 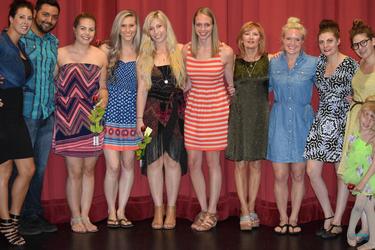 Much like the rest of the Cimino Family, Michelle has been dancing and performing her entire life.  She grew up studying Ballet, Tap, Jazz, Hip Hop, Lyrical, and Musical Theater.  She performed with Elk Grove High School's Orchesis for 4 years and has also performed (and starred) in over 15 musical productions.  After a few years out of state, we are very happy to have Michelle back teaching with Cimino Dance!

Aryn has been performing in recitals and musicals for as long as she can remember.  She has studied dance at many studios including Faubourg School of Ballet, Jo's Footwork, and Salt Creek Ballet.  Aryn has experience in various forms of dance such as Ballet, Pointe, Tap, Jazz, Modern, Lyrical, Hip Hop, African, and Character.  She has taken master classes from Watmora Casey, Randy Duncan, Joel Hall, Jay Fagan, Dr. Charles Carter, and Kirby Reed.  In high school Aryn was a part of Orchesis and choreographed a dance performed in the annual show case her senior year.  Aryn began her love for teaching as a Dance Teacher Assistant at the Pavilion Dance Centre and Streamwood Park District.  Aryn attended Northeastern Illinois University on a dance scholarship and received her B.A. in Communications in Media and Theatre. She also received her minor in Dance Performance, under the direction of Randy Newsom, from Northern Illinois University. She is thrilled to be teaching at Cimino Dance Studio for her tenth year!  Aryn is so thankful to be doing what she loves and sharing her passion of dance with her students.
(Aryn has been with Cimino Dance since 2008)

As a child, Mr. Robert always enjoyed going to dance shows and seeing others perform. At age 14, he decided to study dance and experience the thrills of performing on stage. Over the years, Robert has taken classes in a variety of styles of dance and has enjoyed all the opportunities he has had teaching various styles of dance at Cimino Dance Studio.
(Robert has been with Cimino Dance since 2008)

Carli found her love for dance at age six. She started dancing at Cimino Dance Studio the year they opened in 2007. After finding her passion for dance, she spent hours at the studio studying Jazz, Tap, Lyrical, Ballet, Modern, and Pointe, and has a particular love for Tap. In high school she danced in Elk Grove High School's Orchesis where she choreographed many dances and was proud to have the opportunity to serve as President. Carli is attending Harper College on a scholarship and hopes to find her passion through helping people. Carli is very excited to be teaching at Cimino Dance Studio this year.
(Carli has been teaching with Cimino Dance since 2019)
​

Christina has been dancing since the age of four and has been in love with it ever since.  She has studied Ballet, Tap, Jazz, Lyrical, Hip Hop, and Pointe.  While attending high school, Christina was on the Varsity Poms team for all four years and was voted Captain her senior year.  During her junior and senior year, her team competed at the TDI state competitions.  She also had the opportunity to perform at the Rose Bowl half-time show in Orlando.  After high school, Christina has worked with the Elk Grove High School Dance Team choreographing routines, running summer camps, and assisting in improving their competition dances. Christina has been teaching at Cimino Dance Studio for six years. She has taught a variety of classes, including jazz, hip hop, and lyrical while still taking additional classes. Outside of dance, Christina recently graduated from DePaul University with her Bachelor’s Degree in Accountancy.  She is currently working full-time at Textura Corporation as a Staff Accountant.
​(Christina has been teaching with Cimino Dance since 2011)
​

Lauren has been dancing since age 3 and could not imagine her life without it.  She has studied Ballet, Tap, Jazz, Hip Hop, Acro, Musical Theater, Lyrical, Pointe, and Modern, but has always considered her specialty to be Ballet.  Lauren has performed in dance recitals and musical productions, not to mention her performances with Elk Grove High School's Orchesis and the Northern Illinois University Silverettes Dance Team.  In addition to performing, she also began teaching dance at an early age, beginning with substitute teaching at Dorothy's Dancing Unlimited and teaching at Morton Grove Pre-School and Bloomingdale Park District.
Throughout the past 12 years, Lauren has choreographed over 120 dances for Cimino Dance Studio performances and four entire Harry Potter Ballets!  She also choreographs annually for the Concordia University Dazzlers Dance Team.  She is a licensed Zumba and Zumbatomic fitness instructor and an AFAA Certified Group Fitness Instructor.  She is also happily the Artistic Director for Elk Grove High School's Orchesis program and EGHS’s Competitive Dance Team Coach, extending her love of dance even further into the community.

Giordanna has been performing and competing in dance since early childhood.  Throughout school, this included Poms Teams, Orchesis, and coaching Youth Cheerleading.  Her technical dance training encompasses all dance forms, with specialty in Modern and Jazz.  She has spent the past 14 years educating and choreographing at various studios throughout the Chicagoland area and is currently with her 12th year at Cimino Dance Studio.  Giordanna is also a NASM Certified Personal Trainer and an IHSA Competitive Dance Official.
​(Giordanna has been with Cimino Dance since 2008)

Ali is so excited to begin her 4th year teaching with Cimino Dance! She loves teaching the kiddies and enjoys dancing and performing in her spare time as a member of Outlet Dance Company.
​(Ali has been with Cimino Dance since 2016)

Ali has been dancing ever since she could remember, and is going into her twelfth year with the Cimino Dance family.  She has studied Ballet, Tap, Jazz, Hip Hop, Lyrical, Contemporary, Modern, Pointe, and Musical Theatre.  She danced competitively for two years with the studio, earning two scholarships to summer dance intensives.  She was a captain and choreographer for varsity Orchesis at Schaumburg high school and has been apart of many dance shows as well as theatrical productions.  Most recently, Ali has just finished her second summer at The Goodman Theatre in an eight week, pre-professional Musical Theatre intensive.  Ali is planning on majoring in musical theatre with a dance focus in college and could not have done it without the amazing instruction she has received from the Cimino's.  She is so excited to join the staff and share her love of dance with upcoming generations!
​(Ali has been teaching with Cimino Dance since 2019)

Jenn has been a dancer since she was three and has studied ballet, tap, jazz, hip-hop, pointe and multiple technique classes. She spent most of her dancing career at Elk Grove Park District where she took many classes, was a member of two different companies, and was a teaching assistant. In high school, Jenn moved to Cimino Dance Studio where she was really pushed and grew in her teenage years of dancing. In high school, she was a member of Conant Poms, and was a team captain for one year, leading the team and choreographing. She graduated from Illinois State University with an elementary education degree, and later National Louis University with a Master’s degree. While at Illinois State, Jenn was an active member of Impact Dance team for the 3 years she was on campus.  Jenn is currently teaching 5th grade in Schaumburg School District 54.
(Jenn has been teaching with Cimino Dance since 2015)
​